Our team recently completed a hallway redesign project at 60 Riverside Drive, a twenty-one story luxury cooperative building on the Upper West Side of Manhattan. Once a rolling countryside and farm land for tobacco production, the Upper West Side has since transformed into one of the most affluent and sought-after neighborhoods in the United States. Situated between Central Park and the Hudson River, the Upper West Side is known for its diverse residents and its myriad of cultural institutions such as the American Museum of Natural History, Columbia University, and the Lincoln Center. Its mix of high-rise condos, historic buildings, and classic brownstones have made it a prime filming location for countless iconic films/TV shows including Ghostbusters, You’ve Got Mail, and Seinfeld.

60 Riverside Drive was built in 1964, and the existing hallways needed a renovation for style as well as accessibility. With our redesign, we aimed to modernize the interiors to a level befitting both the building and the neighborhood. The initial proposal addressed the need for a fresh color scheme, upgraded lighting to accent the hallways, and new hardware to bring the space up to code. 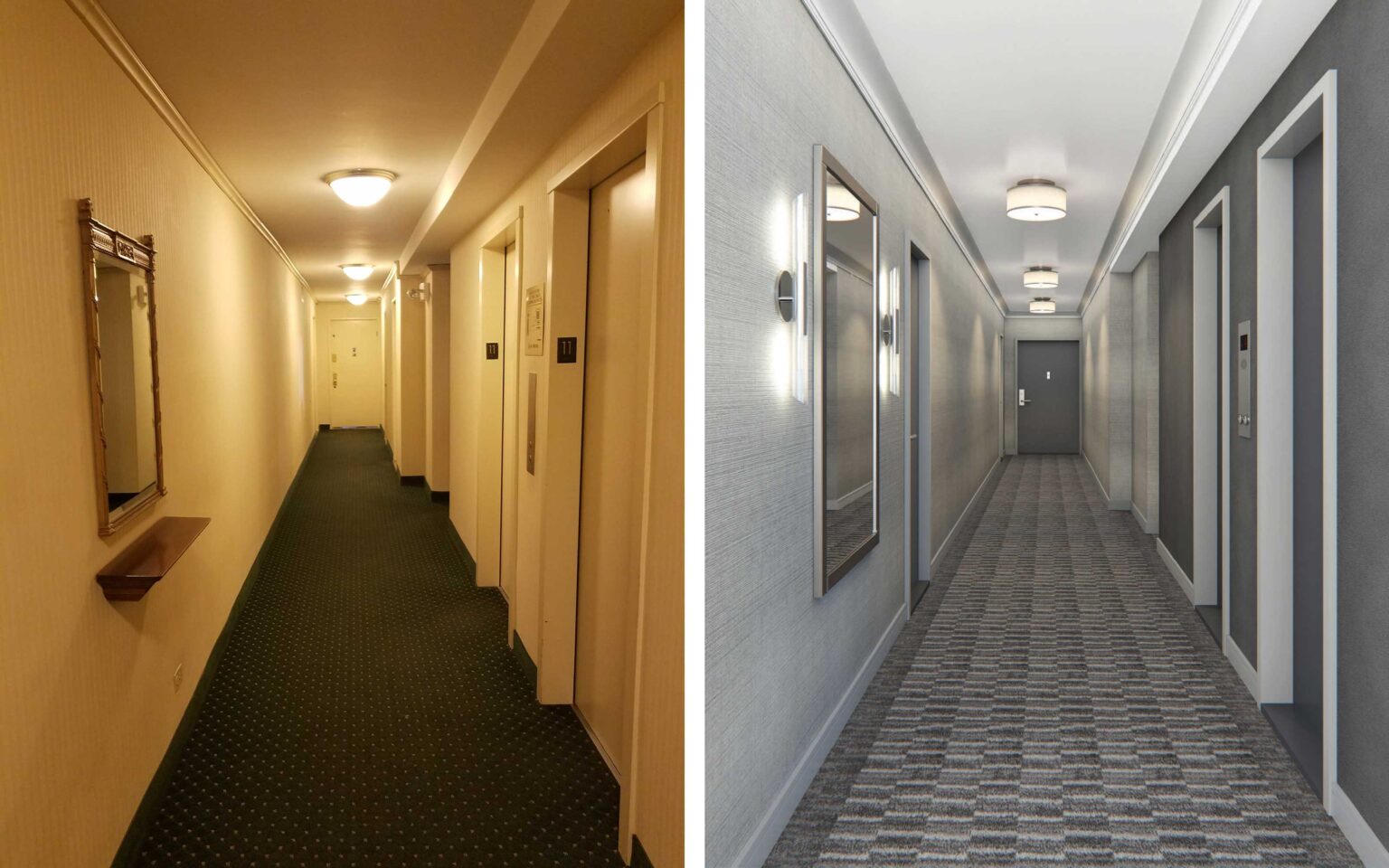 Hallways Before vs. Hallways After

The original beige walls and ceiling offered little contrast so we chose to add some variation along with a sleeker selection: white for the ceiling and two shades of gray for the walls—a lighter one for the main wallcovering, and a darker one to serve as an accent. By using new vinyl wallcovering with an emboss, we were able to hide imperfections and create a clean finish throughout the corridors. We painted the doors and trim with complementary shades like burnt ember and pewter to add further variation while still coordinating with the new color scheme.

In addition to the walls and ceilings, the flooring needed to be upgraded. In place of the worn and damaged carpet, we installed Axminister carpet with a customized pattern to enhance the space. By using carpet bands installed in intervals, we were able to break up the long corridors, making them more visually interesting while also giving the building the ability to replace sections of the of worn areas, as needed.

We also installed a white wood base along the floor and added white crown molding throughout the corridors and around the elevator bank for an upscale finishing touch. The crown-molding served another purpose as well: skillfully concealing wires the previous design left exposed.

A major focal point for our hallway redesign was the elevator bank. We wanted to set this area apart and create a sense of arrival and variation, so we applied the darker wallcovering on the elevator wall. We also replaced the small outdated mirror console across from the elevator doors with an oversized decorative mirror that is more to scale with the space. New sconces on either side of this unit help define the space, offering a polished look to residents as soon as they step out of the elevator.

To provide a seamless transition down the corridors, we also replaced the ceiling lights with customized fixtures. Because they were fashioned specifically for the redesign, these polished fixtures effectively serve as the jewelry of the hallways, adding more visual interest and style. 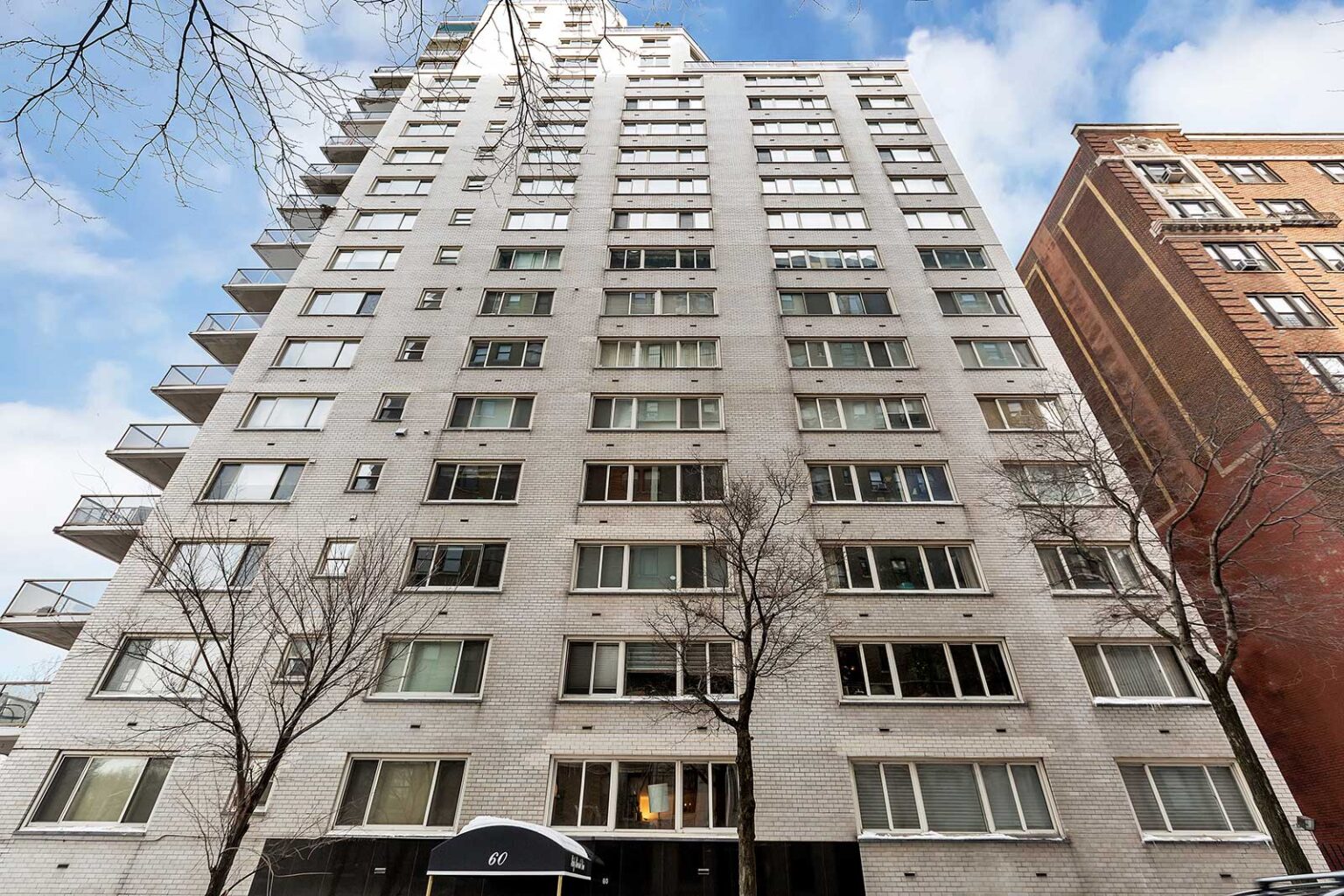 Lastly, our redesign included swapping in modern signage and up-to-code hardware. The new signs for exits, stairs, rooms, etc. match the new color scheme and feature raised Braille lettering and a more stylish look. In the same vein, we installed new stainless-steel hardware and top locks on all apartment doors and replaced the door viewer plates and chimes. Another important update was installing black granite door saddles with a “Hollywood Bevel” to each doorway. Not only does this bring the entryways up to ADA regulation, but it also ensures durability and ease of transition from corridor to apartment. Additionally, we replaced the large outdated emergency lights with smaller, more modern units. These vital upgrades ensure that the space not only appears contemporary, but also offers equity of access and ease-of-use for all residents and their guests.

Overall, our hallway redesign for 60 Riverside Drive helped bring the interior up to modern standards for aesthetics and accessibility. These upgrades serve to enhance the space, adding a sense of visual unity and interest to the building as a whole, which makes it even more desirable for design-savvy buyers and renters.

Is your condo or co-op considering a hallway redesign? Contact us today for a free survey and proposal!